Today’s bit of writing comes from one of Wendig’s Challenges. Specifically this one.

So here’s the photo, from Andrine Klausen, titled ‘The Last of Spring’: 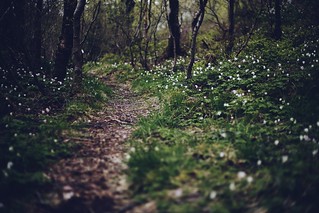 Once, he had been the most beautiful.

She ran, without shoes, as fast as possible, toes pricked by dried twigs, feet bruised by rocks hidden under a thin carpet of last year’s grass and needles. She had started running at the house, and now her lungs burned, tasted like copper, felt on fire, wheezed as she whipped down the path, heedless of the wood anemone, their damp, musky fragrance rising as the summer heat began to corrupt the cool green of the place that had been just hers.

She ran, silent, save for the held-on howl of her breath in her throat.

She remembered that morning more than any others. She remembered the way he said “It’s time,” and did not realize what that meant for him. He got up from the table and flung breakfast off of it, a clear demonstration of his desire and how all would shatter before it.

She remembered the clatter of the dishes on the clean floor, the way the eggs bounced and the potatoes rolled.

She ran, sweatslicked and feverdreamed, glancing behind her only long enough to make certain she was not being followed. The forest itself was full of sound: wind in the boughs, birds calling, crying, the creak of limb and trunk, the rustle of last fall meeting this late spring. Far in the distance, thunderheads boiled up off the horizon, their greypurple churn coming up to fill the whitesunspace between the trees, behind the canopy.

She remembered watching the wall to see how the sunlight fell through the kitchen window. She watched the shadow play of the forest itself as she laid on her stomach and felt him inside her.

She closed her eyes and reminded herself of the spin of the earth, the heaviness of sunlight, the gentle rasp of the wind on the pampus grasses outside the door.

She remembered the lack of tea on his tongue, the unrough of his chin against her shoulder.

He had once been the most beautiful.

She feared as she ran, not him, not him any more.

The whole world would be the color of her thighs, then, a bruise to remember him by.

She feared escape would change nothing.

“It’s time,” he had said, and she did not fight. She had never fought. Not after the first day. Not after the riverbank. Not until today. Today she held the piece of broken dish in her hand until his heart had skipped beats against her back.

When he pulled back and stood in the sun, let it shine on his face, let it glorify his marble skin, the lightning eyes of his father, she struck. Once, for herself, and once for the others she knew had come before her.

And then she ran, naked, save for his blood on her hands, and the bruise of his hands on her thighs.

When she reached the end of the path, she saw that the sky was a bruise, and the sunset was blood, but the water was as blue as it had ever been. She sank her toes into the mud of the riverbank, and felt at once the cold of the earth dissipate the fire between her legs. She laughed to feel her skin slough to bark, laughed to see him come out of the trees, such loss on his face, and her laugh was the sound of the wind in the boughs as her lips turned to leaves.

She laughed, while he put his hands to her and she could not feel him any longer, safe within the new skin that made her Not His At All.

She laughed, knowing she would be ever green, while for him it was finally the last of spring.

6 responses to “The Last Of Spring”

Talk back to me. Trust me; I'm listening. Cancel reply

Butcher, baker, candlestick-maker -- I am a mother, wife, friend, artist, writer, painter, creator... This is my headspace, peeled open, and offered up for your delight.

Or terror, either way.

Here is where I talk about my writing and my work, and put out bits of flash fiction that are as yet unpublished, poetry I want you to see, and pieces of art that may be used as book covers, or possibly adorn my bathroom wall. Either way.

Come for the curious; stay for the crazy.

What Are You Looking For?